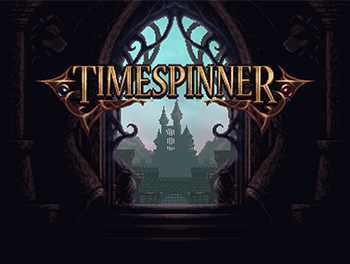 Travel back in time to change fate itself.
Advertisement:

Timespinner is a Metroidvania game developed by Lunar Ray Games and published by Chucklefish released on Steam, GOG, PlayStation 4, and PlayStation Vita on September 25, 2018.

The premise has a girl named Lunais who has just been made a Time Messenger just when the interstellar empire of Lachiem invades her home and kills her family. Determined to take them down, Lunais travels between the past and the present to destroy Lachiem and avenge her family. Timespinner draws inspiration from platforming action-adventure games from the 1990's as well as various Metroidvania titles, particularly from the Nintendo DS era of Castlevania titles such as Castlevania: Order of Ecclesia, while featuring a visual presentation of highly-detailed sprites similar to that of the Super Nintendo with high-quality music of the PlayStation. Throughout Lunais' journey, she obtain various orbs that can grant her weapons and magical attacks she can perform, pick up unique relics that can enhance her exploration abilities, and encounter many allies as well as enemies along the way as she travels between time to set things right.

The game originally started out life as a student project by former Bungie member Bodie Lee, which ranked highest among his class at Western Washington University, where he then decided to develop Timespinner into a full-fledged game. Bodie continued to work on the game's development over the course of 5 years during his free time while working in the video game industry until December 2013 where he decided to work on the game's development full time. The following year, Bodie turned to Kickstarter to fund the game's development and launched a campaign on June 25, 2014. Within a week after the campaign's launch, it was funded and by the campaign's end it eventually raised over $176,667 out of its original $50,000 funding goal, allowing for the development of a PlayStation 4, Vita, and Nintendo Switch* (a 3DS port was planned, but was ultimately canceled due to porting difficulties) version along with various in-game extras. From there, Bodie established his own company at Lunar Ray Games.

is currently under development.