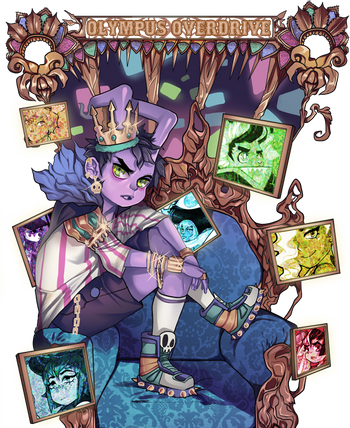 Don't play with the Gods

is a 2013 webcomic by milky and Antares (Hiveworks Comics LLD).

Max, a 19 year old IT consultant living with his sick mother, is met with a popup ad about being the one millionth visitor of the page and a link to an online personality test. He considers it a joke, so he sends the link of the test to his friend via instant messaging before filling the test himself.

Hardly does he finish the test, though, when he gets a package- or more like, a purple statue of a horse. When he touches it, an adolescent boy with horns appears and introduces himself as Hades, Lord of the Underworld. Turns out the two of them must work together- Zeus got tired of everyone constantly moaning about how badly he runs things so now the gods are playing a game to decide who can rule Olympus. The rules?

Each chapter seems to focus on a different character. Chapter 2 introduces a girl named Bong-Cha, Bobby for short, who may or may not be Australian and whose partner is Poseidon. Chapter 3 focuses primarily on the search for Eris and introduces, among others, Alex, a Russian kid whose partner is Hephaestus and Zeus' partner Ellie Jupiter.