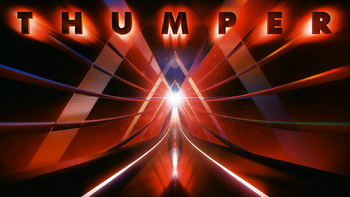 Described as "a rhythm violence game", Thumper is a 2016 rhythm-based Endless Running Game by Drool, with music provided by Brian Gibson, best known as the bassist for Lightning Bolt. It was first released on PC via Steam and on PlayStation 4 on October 10, 2016. Nintendo Switch version was released on May 18th, 2017, followed by a Xbox One version on August 18th, 2017. It also has VR versions playable through Steam VR, PS4 VR and Oculus Rift.

It has essentially no narrative; you are a small, silver space beetle that is set upon a rail and traveling at high velocity. As you go you must navigate into or around the various obstacles in your way such as poles of light along the track, walls to grind against without hitting, and spikes that must be flown over. All the while you are occasionally beset by geometrically designed portal-like objects (or creatures) that you must defeat with carefully timed actions in order to progress past them.

Sounds simple, right? Under this simple veneer is a deceptively difficult runner game with very little margin for error and a visual design heavily inspired by 80's era technological motifs. One of the key points of Thumper is its soundtrack; the game's pounding beats are probably one of the only things that will keep you on track with timing your actions, so this is a game recommended to be played with headphones.