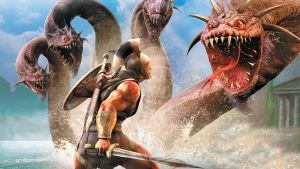 Titan Quest is an Action RPG developed by Iron Lore Entertainment and published by THQ. The game released in 2006, with a very active player community in Germany.
Advertisement:

The game is loosely based on Greek mythology, with the story starting the player character in the ancient Mediterranean (Act 1: Greece), traveling to Mesopotamia (Act 2: Egypt), and then taking the silk road from Babylon into China (Act 3: Orient). Titan Quest is notable for its pseudo-historical setting, and generally is fairly faithful to the eras it attempts to portray, though there are some anomalies. Mysterious monsters known as "Telkines" have appeared along with hordes of monsters, undead and demons, who serve the Titan Typhon, enemy of the gods.

In 2007, the Add-on Titan Quest: Immortal Throne added a 4th Act to the story, as well as several new game features (such as Artifacts, the ability to recover relics and charms from items or a caravan trader's chest accessible in most settlements that grants extra storage space and allows all characters of the same player to store and exchange collected items among each other). The expansion seamlessly continues the story where the original game had left off after the slaying of Typhon, sending the character first back to Greece and then onwards into the Underworld, the Elysian Fields, and across the river Styx to fight the god Hades.

The Titan Quest game can be (re)played from out of the Immortal Throne expansion. Installing the expansion adds all the new features to the original game. The original story must be completed first to unlock the in-game portal to the expansion's plot.

Classes in Titan Quest are called Masteries. The original game offers eight Masteries (Warfare, Defense, Earth, Storm, Hunting, Rogue, Nature, Spirit), while the add-on Immortal Throne adds a ninth one (Dream); these can be freely chosen and combined. Each mastery has several skill trees and specific weapon proficiencies associated with it, allowing further specialization. The first Mastery can be chosen once the character hits level 2. Upon reaching level 8, the player has the option of selecting a second mastery but does not have to, or he can postpone the choice to a later level-up.

A character's title (e.g. Warrior, Hunter, Druid, Spellbreaker, Ritualist, Templar, Brigand, Conqueror, Assassin, Warlock, Pyromancer, Seer, Soothsayer, etc.) and his powers are depending on his chosen Mastery or combination of Masteries, resulting in a total of 9 single-mastery titles and 36 dual-mastery titles. A table showing all the mastery combinations can be found here

. Obviously, some combinations of abilities make more sense than others, i.e. combining a dual-wielding sword path with a defender path whose special abilities depends on the character using a shield is counterproductive. Combat-oriented and spellcasting Masteries can be freely combined for great synergies, which is often more useful than simply combining two combat styles.

In 2017, THQ Nordic (the current owner of the intellectual property) made an Updated Re-release called Titan Quest Anniversary Edition, for the PlayStation 4, Xbox One, Steam, and Nintendo Switch. It integrates 10 years' worth of technical updates, bug fixes, and some of the best community changes like increased speed, newly balanced skills and gameplay elements, new monster heroes, and more. Later that same year, to everyone's continued surprise, THQ Nordic released an entirely new expansion pack named Ragnarök which takes the player on a new journey through Celtic and Nordic Europe. It, too, features a variety of graphical improvements, new areas and weapons, and an all new 10th mastery. In 2019, a third expansion pack came out called Atlantis. In 2021, a fourth expansion called Eternal Embers was released along with 4 new Acts, a new mastery named Neidan and gamepad support.

Some tropes were so numerous, they were split off into other pages, like:

The other tropes are: