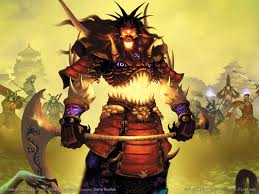 Jidaigeki-themed Action RPG developed by Sierra in 2001. Slightly reminiscent of Diablo. The story follows the samurai serving one of four (historical) clans, as they battle the Dark Warlord Zanshin and his army of undead.

As the story goes, the decadent shogun, Tsunayoshi, bartered his soul to a mad priest, for a potion that could allow him to avoid his impeding death. As a result, he became the Dark Warlord, turned his loyal followers into undead, and declared war on the four lords governing the lands around his mountain stronghold.

The player starts the game as the leader of the armies of one of the four lords, tasked to rally the samurai scattered in the castle, drive out the invaders, and bring home the people who were driven away from their home. After this is done, the seven samurai are sent to undertake a series of tasks, as part of their mission to clear the wilderness from Zanshin's forces. These include requesting assistance from the second clan, conquering the third clan who defected to Zanshin's side, rescuing the lord of the fourth clan, recapturing the eight portal gates scattered around the wilderness, and finally, conquering the Dark Warlord's citadel.

The game map is divided into several major regions including the four castles and their respective territories arranged in a ring, with a path in each one leading up to one of the four mountain slopes, that lead to the Meifumado citadel. Whichever clan the player chooses to serve, he must travel through the wilderness clockwise, and clear all eight areas before climbing the mountain. Depending on which clan the player chooses, he may encounter side quests that provide some backstory and development for certain characters.

During the game, the player can command up to four of the seven characters. Injured or fallen samurai can be teleported back into the player's shrine room, and fresh troops can be called instantly to the field, as long as there's at least one character in the active party. If all characters in the active party are defeated, the game ends, even if all other characters are fully rested and waiting deployment in the Shrine room. The active party itself can return to the Shrine room either by foot, or through the portal gates found in the wilderness. Besides the shrine room, there is no town for the player to rest in and buy equipment. Once found, the blacksmith and the priest can always be accessed through their respective menus. The blacksmith will make you new equipment out of low quality items you give him, or use special 'components' you find to improve the capabilities of your equipment. The priest will give you spell points in exchange for high quality items, sell you potions as well as identify items and remove curses. You can NOT sell any items.

The game is very similar to Diablo and it's sequel, but carries several distinctive features, including a complex item creation system, and the commanding of four member teams, alongside the far eastern atmosphere.

Throne of Darkness provides examples of the following tropes: