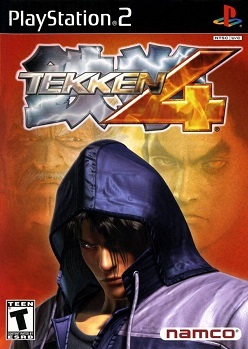 Tekken 4 is a 3D fighting game and the fourth main installment of the Tekken series. Developed and published by Namco, it was released in 2001 for the arcades and 2002 for the PlayStation 2. The arcade version's system board is the PS2-based Namco System 246, allowing the console port to be arcade-perfect.
Advertisement:

The installment introduced many gameplay changes to the series. Doing away with infinite stages, none of the stages in this game are boundless, with specific walls and boundaries that allow for juggling to be performed by cornering opponents into the wall. The game is also the only one in the series to have uneven stages, with some stages having different elevation in its plane, and is also the only one that allows the characters to move before the match properly begins. A side effect of so much focus on environment is that the game feels slower-paced compared to Tekken 3. Last but not least, the graphics have been completely overhauled. The switch to better engine allows for more realism and physics. For example, characters' hair flows as they move, rather than staying in one place. The game is also the first to introduce voice acting outside grunts.

Most of the gameplay modes in Tekken 3 and Tekken Tag Tournament return, except for Tekken Bowl. A new Command Attack mode is introduced, where the player is challenged to follow commands issued by the game one by one. Arcade Mode has been separated into two distinct modes: Arcade Battle, an exact emulation of the 8-stage arcade playthrough with no new content; and Story Battle, which features cutscenes and endings, and allows the player to unlock the hidden characters.

Playable characters in the game include:

Tropes provided by the game include: