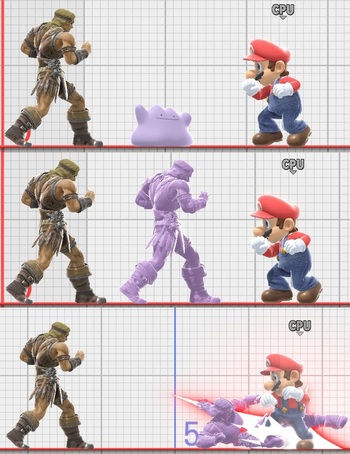 Ditto used Transform!
Ditto transformed into Simon Belmont!
"I know all her moves. Therefore, I have the upper hand."
— Leela referring to her alternate-dimensional doppelganger, Futurama
Advertisement:

A staple of Fighting Games, though not by any means uncommon in other genres, this character copies the moveset of the other characters. Generally, the Ditto Fighter comes in three variants:

In most cases, these characters tend to be less effective than the ones they're emulating, either because the moves were built for the original character model's size/height, or the Ditto Fighters themselves are statistically undermined to compromise for their verastility. This doesn't usually apply if the Ditto Fighter is also the boss of the game.

Named after the Pokémon Ditto, who can transform into its opponents. See also the related Moveset Clone, where two characters have the same moveset. Similar to, but distinct from Power Copying, which involves being able to copy one power/skill that your opponent displays and accumulating them as you encounter more of them; whereas the Ditto Fighter copies the whole power or skill set for one round or match and discards it to fashion a whole new skillset upon facing a different opponent. Not to be confused with Mirror Match, although both can occur. When an outright superpower, this counts as a subtrope of Meta Power.