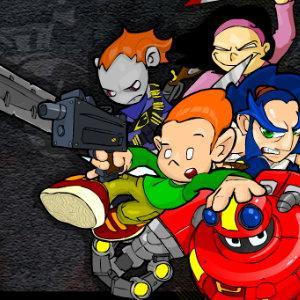 A portion of the game's playable characters.Clockwise from the bottom-center Pico, Piconjo, Nene, Samurai Asshole, and P-Bot.
Newgrounds Rumble is a Flash game released in 2007 (and subsequently updated into 2009) by a trio of users (Luis, NegativeONE

). At its core, it's Super Smash Bros. with Newgrounds characters — the plot being a series of fights for the title of "King of the Portal".

The game can be played for free here.