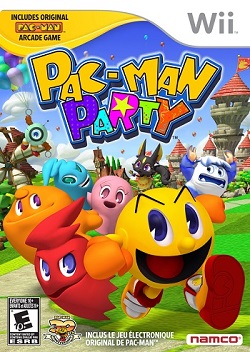 There ain't no party like a Pac-Man Party!
Advertisement:

Pac-Man Party is a Minigame Game for the Wii, reminiscent of Mario Party. Pac-Man collects as many cookies as he can during this adventure. This is also the first game in which Pac-Man has a whole different look. It is also the first time the four iconic ghosts are given distinctive designs to differentiate them instead of being simple Palette Swaps of one another. The game's character designs were later made the basis for Pac-Man and the Ghostly Adventures.

A 3DS version of this game came out a year later.