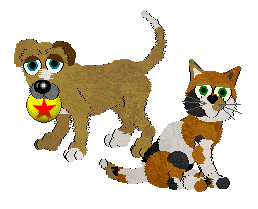 Petz (Dogz and Catz) is a series of games dating back to 1995, in which the player can adopt, raise, care for and breed their own virtual pets. Petz were the world's first virtual pets, and were shown to people to be revolutionary. First released before Tamagotchi, they were among the first 3D characters, rendered in a non-photorealistic cartoon style. Petz has sold over 3 million copies worldwide, and appeals to both children and adults.

The player starts at the Adoption Center, where they may choose a dog or cat to adopt of a breed and gender of their choosing. Once they have found a pet they like the user can adopt and name the new puppy or kitten. After around three days (real time) the petz become adults. Adult petz can then breed and have kittens or puppies of their own in Petz 3, Petz 4, and Petz 5 (this was not available in the first two games). Cross-breeding can create different types of petz, called 'Mixed Breeds'.

There are a number of toyz, food/water bowls and treats available. Petz can learn tricks with positive rewards such as tickling and treats, or trained not to do something using the punishment (water) spray bottle. Petz must be looked after properly; abused or neglected petz may run away.

Users soon learned how to reverse-engineer the system, and began producing additional breedz, toys, playscenes, clothes, and developer tools for the games, as permitted by PF Magic, Mindscape, and Ubisoft Entertainment. This is called 'hexing' by the Petz Community, as it was originally done with hex-editing tools.

A related, but much less well-known, game is Oddballz, also by PF Magic, which revolves around bizarre creatures as pets that can be temporarily shapeshifted into more normal animalz (including dogz and catz). Their toyz and food are equally strange, including a shrink ray and pogo-pad.

But perhaps the oddest outlier is the late-comer "Babyz" which broke the mold, both entirely and not at all. By providing pretty similar mechanics, but adapted for immortal baby/toddlers (that can learn to walk, but not talk)

There were also a large number of otherwise unrelated console games during The Seventh Generation of Console Video Games. These completely eschewed the “ball” style rendering in favor of more conventional graphics, and are completely ignored by the original fanbase.

The Catz game also comes with the (already spayed/neutered, so no freakish hybrids unless you do a bit of tweaking) Bunniez breed, and Dogz players get Pigz.