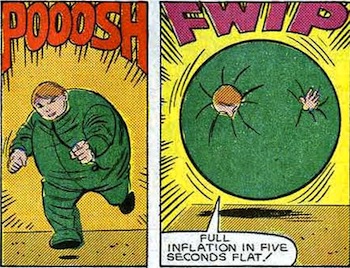 Hot.
Luigi: Did I catch the ball?
Mario: What do you mean, "catch the ball"? You were the ball!
— Super Mario World, "The Yoshi Shuffle"
Advertisement:

A character gets squished into — or otherwise turns into — the shape of a ball, and then gets used as such.

There are two basic approaches to this form of funny injury gags: one is a faster "disposal" gag which involves the balled up character being kicked or thrown out, after which the character returns to normal; the second one is the "sports match" gag, which has the new "ball" be used in an actual sport (frequent choices tend to be basketball, volleyball and soccer, but just about any sport that uses a ball is fair game) - this variation requires some sort of setup, usually through the character getting scrunched up or inflated into a ball, and the gag after tends to be on the longer side in terms of runtime.

May be a Bouncing Battler if a character uses this as his primary fighting method.

For cases where only the character's head is used as a sports ball rather than the entire body, see Severed Head Sports.

After Tom and Jerry mess up his favorite teddie bear, Spike puts them through the ringer to get a new one.

After Tom and Jerry mess up his favorite teddie bear, Spike puts them through the ringer to get a new one.