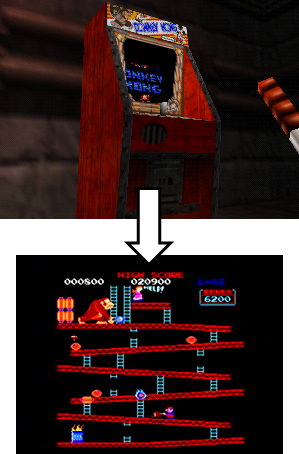 Step 1: Pull the lever next to the arcade machine. Step 2: Enjoy this blast from the past.
Advertisement:

A common bonus feature or Easter Egg in later installments in a Video Game franchise is to hide a copy of an earlier game from the series in the current game.

This is usually (but not always) a hard-to-find special bonus, often an Old Save Bonus or New Game+. Additional rewards may be offered for beating the embedded game. For technical reasons, this tends to be limited to games which have a very primitive previous incarnation.

Subtrope of Game Within a Game and as such has to be recreated/emulated by the game itself, it's not the original game bundled with the new one or downloadable for free. See also Nostalgia Level. Has nothing to do with Precursors.