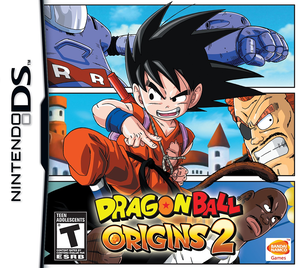 Dragon Ball: Origins (or Dragon Ball DS as it's known in Japan) are a series of Nintendo DS games based off Akira Toriyama's famous manga/anime of the same name. The games retell the adventures of Son Goku and his friends in their younger days in their quest to find the seven Dragon Balls. The gameplay consists of Action-Adventure elements while incorporating some light platforming and puzzle elements. Origins covers the early parts of the series up until the 21st Tenka'ichi Budōkai arc, while Origins 2 covers the Red Ribbon Army and Fortuneteller Baba arcs.

Tropes appearing in the games: