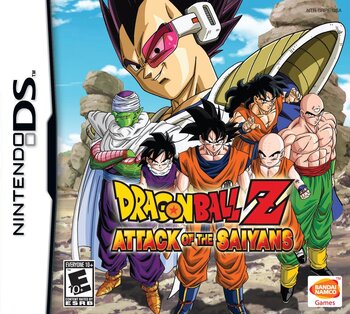 Dragon Ball Z: Attack of the Saiyans is a 2009 Eastern RPG for the Nintendo DS developed by Monolith Soft. It is one of the first Dragon Ball games to be released in the West by Namco Bandai after Atari's license had expired. The game was released under the Dragon Ball Kai name in Japan to coincide with the debut of the Kai anime.

The game follows the Dragon Ball story from the Piccolo Jr. Saga through the Saiyan Saga of Dragon Ball Z, divided into 15 chapters which are further broken up into a total of 80 missions, with bonus missions available following Vegeta's defeat. Gameplay is presented with traditional 2D sprites, and the controls rely on the D-pad and buttons rather than the stylus. Overall, the game received generally positive reviews, and was the third-best selling DS game in Japan upon its release.

Dragon Ball Z: Attack of the Saiyans contains examples of: