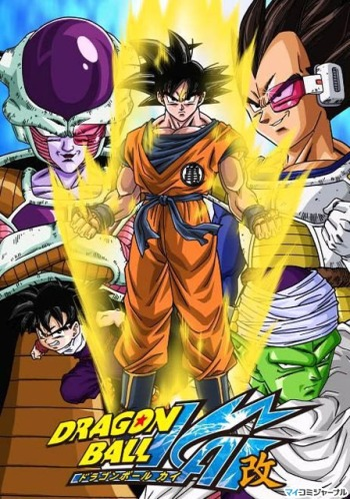 They're back. Now with 86% less Arc Fatigue!
Don't stop, don't stop! We're in luck now!
Don't stop, there's so much to be found!
We can find paradise!
All we have to do is go, go! Free your soul!
Dragon Soul!
— Dragon Soul, the series' first Theme Tune (English version)
Advertisement:

Dragon Ball Z Kai (Dragon Ball Kai in Japan) debuted in April 2009 in time for the 20th anniversary of Dragon Ball Z. In a nutshell, Kai is a recut of DBZ for the 21st century; it tells the same old story of the original show, but with a few new tricks up its sleeve.

Toei Animation took the animation from DBZ, updated the coloring, and converted the recut footage to HD. Kai turns down the amount (and frequency) of talk breaks and features next-to-no filler or padding. The end result of these changes? A sleeker, faster, more faithful and action-packed show than the original anime adaptation. For comparison, DBZ had 194 episodes from its beginning through to the end of the Cell Arc; Kai has only 98 episodes for that same timeframe. Counting the Buu arc episodes, Kai has a total of 167 episodes to DBZ's 291.note This gives us a ratio of roughly one Kai episode for every two of DBZ.

Christopher Sabat directed the English dub of the series. Unlike previous dubs of DBZ, the English dub of Kai comes considerably closer to the Japanese version; lacking the character rewrites, replacement scoresnote though the entire Japanese score ended up replaced around the world with recycled music tracks from DBZ when the composer was found to have infringed upon other artists' work, and major dialogue changesnote Save though a few Never Say "Die" moments in the Nicktoons and CW broadcasts that their dubs of DBZ had.

The uncut version of the English dub would be aired via Toonami on Adult Swim in November of 2014, followed by reruns on [adult swim] proper beginning in February 2015. The Final Chapters began airing on January 7, 2017, running alongside Funimation's dub of Dragon Ball Super. It formally concluded its run on June 23, 2018.