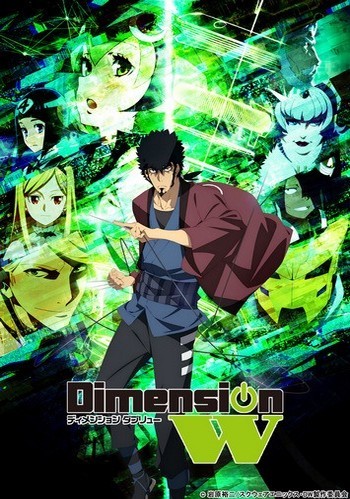 It's 20 Minutes into the Future, and Nikola Tesla's vision of free energy has been realized with the discovery of Dimension W, where untold amounts of energy are waiting to be harnessed. This energy can now be directly drawn out using small devices known as "coils". However, while the coil usage is controlled by the New Tesla Company, the economic titan behind the new world order, illegal coils have become the new hotcakes of the underworld. These coils not only can deliver a much higher output, but they're also untraceable.

Mabuchi Kyoma, a man who lives in a rundown gas station and has a passion for 'vintage' gas-powered cars, knows from personal experience the danger the coils can bring, and as such, hates them with a passion. He is also a Collector - a repo man of sorts, who hunts down illegal coils for money (and gasoline).

One day, he goes out on one of his usual missions. When he gets to his target's hideout, however, there is another stranger there: a mysterious, cloaked captive that appears to be a young lady. After dealing with the thugs, he finds out that the girl - calling herself Mira - is actually a highly-advanced robot. Not soon after, her "father" is found out by the New Tesla Company. He is Dr. Yurizaki, the genius behind this new world, who went into hiding after the company apparently murdered his family in a bid to get to his newest inventions. Pushed over the edge and now, against the wall, Yurizaki activates a device that fries every coil in the vicinity, including Mira's, and then implodes, killing him in the process.

After Kyoma brings the offline Mira to his employer, the large-sized woman Mary, in hopes of selling her off for some parts. When they insert a new coil into her and reactivate her, the android gets on her knees and asks to let her help them collect illegal coils. Mary is happy to oblige her request, partnering her with Kyoma... much to his protests. And so, begins a unlikely partnership between a man stuck in the past hating the coils, and an emotional robot girl representing the pinnacle of coil technology.

Dimension W is an Science Fiction manga series created by Yuji Iwahara, most known as the creator of Cat Paradise and King of Thorn, as well as the main character designer for Darker than Black series. It began serialization in 2011, with twelve compiled volumes so far. An Animated Adaptation produced by Studio 3Hz and Studio Orange and licensed by Funimation (who in a first for the company, were part of the anime's production committee) aired in early 2016, and adapted the first seventy-five chapters of the series (the part that was serialized in Young Gangan magazine).

The anime aired with an English dub on Adult Swim's Toonami block in 2016. The series is the second anime to run on Toonami while it was still airing in Japan, the first being Space☆Dandy.