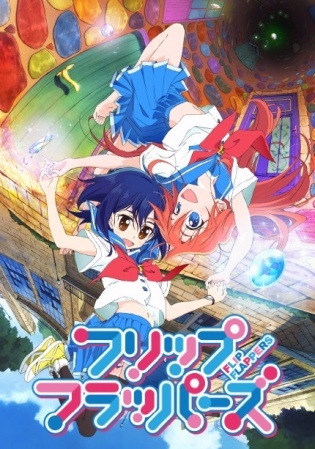 Cocona is a girl who has friends and is intelligent enough, yet lacks any clear goals or motivations and lives a drab, dull middle-school existence. That all changes when Cocona sees an energetic girl with bright red hair flying past her on a hoverboard. This girl, named Papika, decides that Cocona absolutely must go on an adventure with her and takes her to a fantastic world called Pure Illusion. Before she knows it, Cocona, together with Papika, finds herself tasked by the mysterious organization FlipFlap to search Pure Illusion for gems called "Amorphous", which when gathered together are said to grant any wish.

Flip Flappers is an original Magical Girl anime which aired in the Fall 2016 Anime season. It is produced by Studio 3Hz and directed by Kiyotaka Oshiyama. It is simulcast for international release through Crunchyroll. The anime was also licensed in America by Sentai Filmworks.

to progress into the next phase of a relationship.