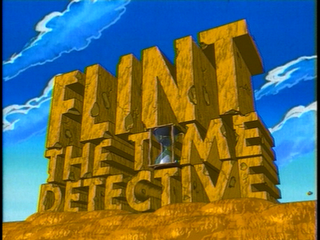 Young caveman Flint Hammerhead (Genshi) and his father Rocky Hammerhead (Dad-tan) were turned into fossils by the villainous time traveler Petra Fina (Time Pilfer). Luckily, they were found in the 25th century by Tony Goodman (Tokio Yamato) and his sister Sara Goodman (Sora Yamato) who brought them to their uncle Dr. Bernard Goodman (Professor Yamato). He managed to restore Flint but was unable to fully restore Rocky, so Rocky was fashioned into a hammer which Flint could use.

Flint, Rocky, Sara and Tony then join the Time Police with the purpose to travel to different historical eras to recover mechanical creatures called Time Shifters while opposing the Dark Lord and his servants, Petra Fina and her henchmen Dino and Mite. Joining our heroes was the mysterious Merlock Holmes (Kyoichiro Narugami), who was rather attracted to Sara.

Flint and company need to collect all the Time Shifters so they don't damage the timeline. These are nice creatures not doing it on purpose, but Petra Fina can use a rubber stamp control and transform them into hideous monsters called Con forms which the heroes must revert through the Power of Friendship.