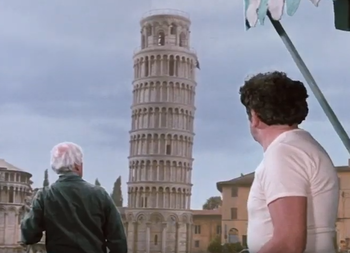 Thanks a lot, Superman
Any fictional depiction of the Leaning Tower of Pisa

is likely to show it toppling or threatening to do so, being straightened, and/or being made to tilt in the opposite direction. Despite its stone-block construction, it generally won't crack or shatter at the base from such abuse, but merely rock back and forth as if it's one solid piece.
Advertisement:

Often used in disaster flicks, cartoons, or stories involving superpowers. Entirely mundane works may show tourists playing with this trope, posing for pics as if "holding up" or "fleeing the collapse of" the Tower.

Examples which involve the tower getting straightened often forget one important fact: because the tower was built in 3 stages over 200 years, and started leaning very early in construction, the upper floors were built with one side longer than the other (making the tower curved) to compensate. So basically, you can't ever straighten the tower; even if the base two floors could be perfectly straightened, the tower would start to lean in the other direction due to the built-in curve, and possibly collapse at some point in the distant future.