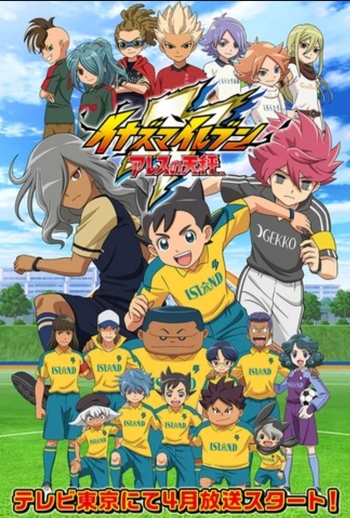 The anime is an Alternate Continuity ot the original anime. The alien attack of the second season never occured. Raimon Eleven has disbanded due to the Japanese teams being deemed weak compared to their international competition. The members of Raimon Eleven have sent to different soccer teams across Japan.

The series stars Sonny Wright (Inamori Asuto in Japan) and his small-town football team. Japanese soccer teams require sponsorships to survive, but their island is too rural to get a sponsorship. The team is sent to the mainland to play. Sonny's team replaces the Raimon Eleven as Raimon Junior High's soccer team.

The anime ran from April 2018 to September 2018 in Japan. It is the second of the Inazuma Eleven to receive an English dub. In America, the show began airing in April 2019 as a replacement for Yo-Kai Watch on Disney XD's schedule.

It received a sequel series, Orion no Kokuin (lit. The Seal of Orion), which aired from October 2018 to September 2019, and spanned a total of 49 episodes.

The truth about Hikaru

Iwato finds out he has been writing love letters to a guy all along.

The truth about Hikaru

Iwato finds out he has been writing love letters to a guy all along.