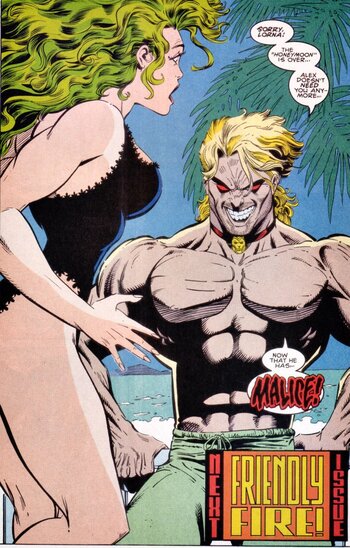 "Fly away, my little akuma, and evilize them!"
— Hawk Moth, almost every episode of Miraculous Ladybug
Advertisement:

So you are planning on a series where every episode your hero will fight a different opponent. But you also want to show him as a nice soul that wants to help any extra that crosses his path, so you want to add a victim as well, but that seems too crowded for a single episode, wouldn't be better if you could condense it a little? Maybe by combining up some things?

Enter the Villain-Possessed Bystander. Instead of creating his own monsters, or fighting directly, the villain will take a random person from the audience and transform them into a minion. This can be really convenient in a family-friendly show since it creates an in-universe reason for not killing them. These are normal people that cannot help themselves so the duty of The Hero is not only to stop them, but help them get back to normal. This trope is quite common not only for Tokusatsu and Sentai fare, but also for Magical Girl shows, though it's also started showing up in more western shows as well.

Since the villain creating monsters from literally any random person would be too powerful, and because the villain needs to be, you know... a villain, in most cases the selected victim tends to be someone that recently suffered some kind of distress, most likely emotional so, while they may be willingly lured into helping, once the transformation takes place they tend to be too controlled by the villain to make any real choice (though exceptions might apply).

While it can be used a single time it tends to work better in a Monster of the Week format as the villain's Modus Operandi (or at least a frequent strategy) since it provides more time to know the victim, and allows for the use of more victims as well. And while is normal for a villain to be the one responsible for this, is not necessary; it could be natural or caused by a non-sentient force, as long as someone can be infected (and it can be solved in a single episode).

This always involves Super Empowering, likely relating to the emotional distress of the victim. May overlap with Hijacked by Ganon if a new villain was actually empowered by an old one. May involve Demonic Possession, which usually involves the hero having to Beat the Curse Out of Him. Compare Clone by Conversion, Reforged into a Minion, Face–Monster Turn and Break the Cutie. Contrast Not Me This Time, when a new threat actually is unrelated to the common villain despite initial thoughts.

The Sorcerer, the ancient evil who is imprisoned underneath Norrisville High can literally sniff out peoples' negative emotions coming off people, which leaves them vulnerable to being "stank'd" into horrific monsters, both inside and out. Fortunately the way to "destank" a person is to destroy what they hold most dear, after which they revert back to normal.

The Sorcerer, the ancient evil who is imprisoned underneath Norrisville High can literally sniff out peoples' negative emotions coming off people, which leaves them vulnerable to being "stank'd" into horrific monsters, both inside and out. Fortunately the way to "destank" a person is to destroy what they hold most dear, after which they revert back to normal.