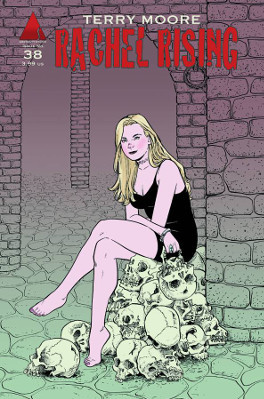 Rachel Rising is an Urban Fantasy comic series with a focus on horror and the supernatural by Terry Moore, best known for Strangers in Paradise and Echo.

The story begins with a young woman named Rachel clawing her way out of a shallow grave in the woods around the small town of Manson, where she lives. All the while a mysterious blonde woman dressed in a white coat watches as Rachel staggers out of the woods. A disorientated Rachel makes her way home, rests, then sets out to find the people she trusts most (her Aunt Johnny and Jet, her best friend since childhood) to try to make sense of things, including why it's several days later than she thought, why she can't remember what happened to her that caused her to wake up in the grave, and why some people she encounters who know her refuse to believe that she's really Rachel.

Meanwhile, the same woman that watched Rachel rise from the grave is making her way around town, causing mayhem in her wake, with a specialty for causing people to murder their loved ones. In particular, she targets and follows a young girl named Zoe, who takes to murder with unnerving skill. When Rachel and Zoe meet and Rachel tries to confront the woman in white, what had been a bad couple of days for Rachel and Zoe becomes some very bad days for everyone around, and reveals multiple powerful supernatural forces who plan on using Rachel, Zoe, several others and the town of Manson itself as part of their designs.

The series would concluded with issue #42 in May of 2016, which brought the story up to 7 trade paperback volumes. At one point there was talk of adapting the series for television, but that fell through in 2013 and Moore hasn't found any other takers for the script.