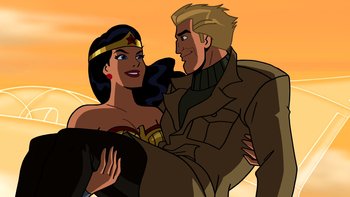 It is very common that when women are the main characters, they will have a boyfriend that is depicted as a complete badass or a Badass Normal. They singlehandedly fight the Monster of the Week and even rescue their action/magical girl friends when they are still learning how to use their powers/skills. They are more than capable of facing the Big Bad and his/her goons without powers.

In short, they are completely badass...Except whenever their action/magical girl friends are around. Then they somehow become very ineffective fighting against the Monster of the Week and are completely useless against the Big Bad. Sometimes, they even get demoted to Distressed Dude. Many times, they are not allowed to win a fight unless their girlfriends are somehow incapacitated. Most of the time they are somehow unable to get the same powers/abilities as their action/magical girl friends.

One potential (in-universe) explanation for this is that the boyfriend in question is a Badass Normal, while the "girlfriend" has actual magical powers, special abilities, or is a much better Badass Normal. And while the boy is no doubt skilled, he can't really compare to soul-eating monsters or the ability to shoot fire from one's hands.

Another explanation is that though the boy has powers of his own, and is more than a badass normal, he isn't the Chosen One, or lacks the local monster-killing MacGuffin, which the girl noticeably has.

When this trope is played straight, it is used to denote Girl Power. This trope appears primarily in shows intended for girls, where the spotlight is supposed to be on the female characters as the heroes.

Compare to the Worf Effect, where a badass character is taken out easily to show how tough the new villain is. The difference between a Useless Boyfriend and the Worf Effect is the setting and how frequently the badass in question is beaten down. The Worf Effect will overlap with Useless Boyfriend, but the Boyfriend is characterized by his uselessness. Though he may also serve a similar purpose, the "Worf" will be actually effective against a wide variety of enemies and will gain victories for their side, whereas the Boyfriend serves as a punching bag until his girlfriend shows up.