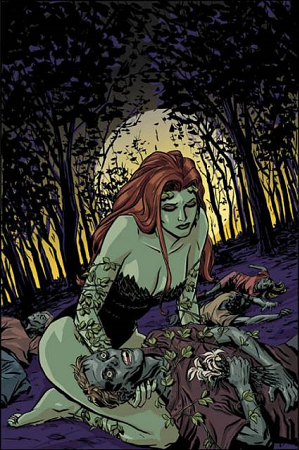 The power over life... to bring death.
"Zhe healing is not as rewarding as zhe hurting."
— The Medic, Team Fortress 2
Advertisement:

You should never trust anyone with "Bad Powers"; more often than not they're villains, and at best will be dark but not evil. Instead, you should completely trust that lovely person dressed all in white with the happy Light based powers, like granting life to the fallen and raining down beams of judgement from the heavens... which they're using to raise an army of undead and sic 'em on some innocent villagers to tear and lick the flesh clean from their bones...

Believe it or not, good powers do not necessarily make you a good person. Whether it's the Empathic Healer, Barrier Warrior, someone with powers fueled by love, light, or other traditionally positive Elemental Powers, it's ultimately personality and choice that determine whether the character is good or evil. And boy, have they ever chosen to be evil. In many ways this makes them worse than villains with "bad" powers; whereas the evil applications of say, a death touch or the ability to summon demons are obvious, someone with "good" powers has had to sit down and carefully think of ways to use their naturally beneficial powers to harmful ends.

Maybe they ask for money in exchange for healing, or outright extort villagers for payment in order to "solve their problem". Beyond this merely mercenary outlook, a Bad Person with Good Powers might use their powers for outright evil or to aid evildoers, or find a way of twisting their previously squeaky clean power (say, Psychic Surgery) into a squicky mean torture. A not-so-savory peep with Healing Hands may be more interested in prolonging Cold-Blooded Torture by beating and mutilating their victims to a bloody, still-living pulp, then reversing their wounds to go back to square one, then rinse and repeat at their twisted leisure. Lastly, any Knight Templar with "Holy" powers might be so dogmatic in their belief that they twist their holy mandate into things like ethnic cleansing of "Always Chaotic Evil" races.

This can be considered a form of What the Hell, Hero? (well, villain), with the evil of using powers to make money varying by writer. To put it another way, it's like a personified version of a Crapsaccharine World, as the initial vision of someone whose powers seem well-meaning belie more heinous intent.

The opposite of Bad Powers, Good People.

Like all miraculous, the Butterfly Miraculous was created as a tool for great heroes, but Hawk Moth intends to use it to create supervillains under his thrall.

Like all miraculous, the Butterfly Miraculous was created as a tool for great heroes, but Hawk Moth intends to use it to create supervillains under his thrall.