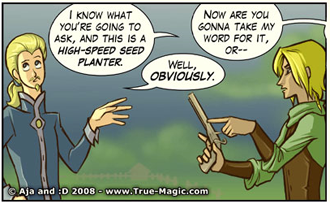 Do I gotta pop a kernel in your ass?
Advertisement:

is a humorous fantasy webcomic written and drawn by Aja and co-author :D. It follows the adventures of five residents of Homeville, who for certain reasons have gotten rather adept at using such unlikely weapons as guns and halberds as farm implements. With the villagers of Homeville constantly beleagured by nobles who come by to violently harass them, our heroes finally take it upon themselves to trek to the city of Hometropolis in an attempt to get the nobles to leave them alone.

The original comic ran for about five years, but the entire thing has recently been rebooted with much-improved writing and art. You can start reading it here

The main characters, in no particular order:

Other characters, who may or may not end up being important. We'll see!