You Must Be This Tall to Ride 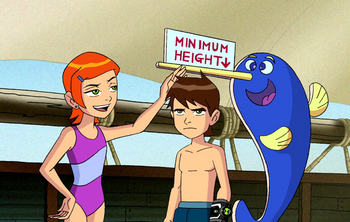 "Looks like you came up a bit short, Ben."
Marina: Hey, Pearl. Why do you always wear those thick-soled boots to this park?
Pearl: My dad gave them to me. They make me tall enough to ride the rides...
— Splatoon 2
Advertisement:

Amusement parks are the thrill of children everywhere and the bane of adults seeking to keep them under control. With rides filled with excitement, thrills, and a bit of danger, these areas are a kid's paradise.

However, due to pesky safety regulations, equipment and seats made to accommodate adults, not to mention pesky liability issues and lawsuit-happy parents, park regulations dictate that younger children can't ride the most intense, exciting and popular rides. In Real Life, these safety concerns are perfectly valid and are there to protect children - safety harnesses that fit an adult may be too large to properly restrain a child. In fiction, this is rarely if ever pointed out. Though rarely mentioned, the inverse of this is also true of Real Life: child-scale rides are often too small to be safe (or at least comfortable) for adults (and some adult-scale rides are too small for adults of exceptional size).

This trope is prevalent across various media, though will rarely occur in works not set between the middle of the 20th century and 20 Minutes into the Future. Generally, usage of this trope is followed by said kid desperate to find a way onto the ride, and doing so may be considered a Rite of Passage into becoming a teenager. This trope may either be played for laughs in order to highlight the zany schemes that the children will take in order to sneak onto the ride or suddenly grow tall enough for it, or for drama if the kids end up getting hurt due to neglecting the precautions of a very Reasonable Authority Figure.

In contrast, it may also be used as an excuse for a child or young teenager who is legitimately scared of said ride. Of course, the plot requires that said child actually be tall enough to ride, in which case elaborate, wacky hijinks are played in order to avoid the ride, before finally admitting his/her fear, going on anyway, and generally enjoying him/herself. This variant is almost always played for laughs.

Bessie is excited to ride the rollercoaster The Punisher, but she's one-sixteenth of an inch too short.

Bessie is excited to ride the rollercoaster The Punisher, but she's one-sixteenth of an inch too short.