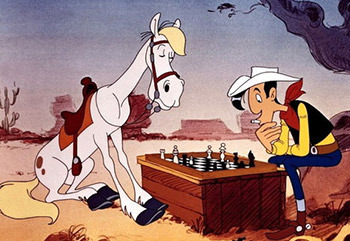 I can only beat him by sacrificing my knight. He finds it offensive.
"Those old war horses never shut up."
— Tom Siddell

Whether chatty horses, philosophical dragon mounts, or calculating cars, some characters have modes of transportation that talk back.

Useful because it justifies/averts Automaton Horses, as well as providing sage advice, companionship, and enabling some really cool stunts.

Often Hilarity Ensues if the rider accidentally 'forgets' this, treating their steed like a normal animal.

Subtrope of Sapient Pet. Compare A Boy and His X, Living Ship, Sapient Tank and Space Ship Girl. Prone to Horsing Around if you piss them off. Likely to be a case where Only the Chosen May Ride. Often part of a Smart Animal, Average Human duo. See also: Bond Creatures and Mechanical Horse.