Ship Out of Water 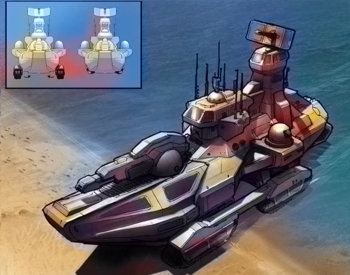 It's not just planes that need landing gear anymore.
Boats are made for one purpose: to travel on water. Or so you'd think. In fiction, if need be, characters can take their boat straight onto land directly out of water. In action sequences, it's a sign of badassery, but it can also be a Comedy Trope. Often overlaps with Sand Is Water.
Advertisement:

It can distinguish a Cool Boat from a normal boat.

The opposite of Amphibious Automobile, which is a land vehicle that can go straight to water, though obviously there is a lot of overlap. Not to be confused with Saharan Shipwreck or anything to do with Shipping.