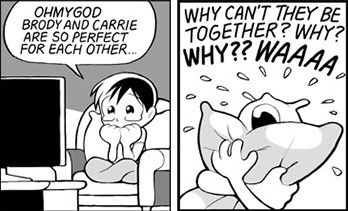 "And what fastens attention [...] like any passage betraying affection between two parties? [...] We see them exchange a glance or betray a deep emotion, and we are no longer strangers. We understand them and take the warmest interest in the development of the romance. All mankind loves a lover."
— Ralph Waldo Emerson
Advertisement:

Rooting for fictional romance to happen.

The term "Shipping" — which ostensibly derives from "Relationship" (though it might as well be "Worship"; in some fandoms, it's Serious Business) — was originally coined by fans of The X-Files, who were divided between "relationshippers" pushing for romance and "noromos" who would rather have No Hugging and No Kissing. The phenomenon itself, however, was ubiquitous in practically every fandom long before. The source of the term's popularity is shrouded in myth, but Geek Mythology has it that you can blame people in the Pokémon anime's fandom who rooted for Jessie and James (of Team Rocket) to get together and decided to call themselves "Rocketshippers". This got the term to catch on in that fandom, then people brought it with them to other fandoms. Today, Wikipedia has a tiny Shipping disambiguation note at the top of its freight-transport article

redirects, and has its own article on fandom shipping

note linking back to this TVTropes page.

Of all the obsessions that universally afflict fandom, shipping is by far the most persistent, widespread and prone to be Serious Business. It knows no boundaries of age, demographic and gender note contrary to expectations one might reasonably have involving yaoi/yuri-worshipping, fan fiction-writing, squealing teenage girls. This might raise an eyebrow or two on first inspection, but honestly, shipping is just a consequence of plain old human nature. Love, Lust, Romance, Hormones — call it what you will, it is a huge part of the human experience. Just glance at our long list of Love Tropes to see all the ways romance weaves into fiction. And even if a story is not "romantic" by genre, a well-done love story can become its emotional anchor.

"Shippers" is the universally accepted name for those fans who invest themselves in romantic plotlines — both canonical and hypothetical. Shippers' level of investment can range from "It's all jolly good fun," to "This seriously impacts my enjoyment of the work," to "Prepare for war."

It's tempting to assume that shippers are so invested in romance because they are reading themselves into the place of one of the characters, and living the romance vicariously through them. This does happen — not surprising, because most fiction relies on at least a little empathy. That said, beware of the old "pathetic nerd living out fantasies through fiction" stereotype. Why one prefers a given ship (that is, a fictional couple) can be based on any number of things, from liking the general "type" of relationship (such as Brooding Boy, Gentle Girl), to thinking they have hot chemistry, or great long-term compatibility — or maybe they just look cute together! On the flip side, a lot of ships attract fans on account of the destructive or twisted dynamic between characters.

Somehow, this leads to vitriolic forum threads with a hundred times the activity of all the other threads in the forum combined, titled something like "Will Bob get together with Alice or Eve? Round 997!" note For all we know, this very well may have actually been a thread title in a Cryptography forum. Which in hindsight is understandable, given that when a lot of fans are projecting themselves into one character, it's bound to get very crowded in there. Really, put just two fans in a room and give them five minutes or so, and they'll get into an argument to the death about some incredibly fundamental fandom issue; having hundreds of fans in the same internet is just asking for trouble. And when you ask for trouble, what you get is, in the words of J. K. Rowling, scary and vehement cyber gang warfare.

Shipping is all about the anticipation. Paragraphs and essays and counter-essays, filling megabytes and spanning dozens of pages, will be written about who will get together, who should get together, and what the disciplines of political science and feminism and probability theory have to say about the issue (the above is Not Hyperbole). No ecstatic shipper has ever written a gigantic dissertation titled "Hurray!! Alice and Bob! FINALLY!!" or any fandom equivalent. People will argue endlessly about the romantic future of nearly any given ensemble, but if that point should actually be resolved, the discussions will basically go through a round of ranting and gloating and then unceremoniously run out of steam.

That's probably because anticipation is something that's easy to feel you're a part of, even if the anticipation is for something fictional. Real life romance, for all its shortcomings, actually happens for us Real Life people: We move on from looking forward to something great to experiencing something great (or at least we can hope). Fictional romance, not so. Actually being in a romantic relationship and getting to watch a fictional romantic relationship are very different things, much more different than looking forward to each of those, respectively. The contrast is jarring — you were a part of this great love story, and now, suddenly, you're not. Cue disillusionment. Of course, the near-universal reaction is to move on to the next fandom, making shipping suspiciously similar to an addiction.

Canon and authorial intent do not dictate people's shipping preference. You'd be hard-pressed to find anything that honestly puts any sort of restraint on shipping preference. Characters may be shipped despite being still in grade school, of the wrong sexuality, biologically related, dead, Just Friends, mortal enemies or just generally the bane of each other's existence, separated by an age gap of decades or centuries, not of the same narrative continuum, part of a story where romance just isn't an issue, inanimate objects, nigh total strangers, considered as a possible couple at all only because they're both left single after you're done pairing everybody else, polar opposites in terms of morality, extremely implausible as a couple by design or even outright denied to ever possibly get together by Word of God. Even when the source material goes as far as to have an Official Couple, sometimes fumbling execution or Values Dissonance will drive fans towards emotional investments diametric to those the author intended. The "I Love You" Stigma, occasionally invoked by some productions, further complicates matters, even if the characters express the sentiment in other ways.

Shippers have a reputation of insane devotion to their One True Pairing and of interpreting the tiniest, most ambiguous details as evidence. That much is clear by the prevalence of Ship-to-Ship Combat in any fandom discussion. In some extreme cases, they will freely admit to actively rooting for sympathetic characters to die just to get them out of the way, or worse, they'll come to the conclusion that since a character is in the way, they are by definition not sympathetic. On the bright side, you can expect them to be friendly at least towards their natural allies and have some limit of how severely they can be starved for validation before they Abandon Shipping. That is, if they ever expected to be validated in the first place.

Frequently, authors know full well how loaded the subject is and tease the audience of actual and potential shippers, sometimes to the extreme of letting the characters themselves join in on the shipping fun. It goes without saying that not all ongoing tease storylines endure and graduate to Relationship Upgrade; and then a majority of the ones that do don't until near the very end. This is usually not done to frustrate fans (or at least, not for this sole purpose), but rather because the writers are also aware of romance being a very powerful device that should be handled with great caution, lest it swallow the storyline whole or reach a resolution past which people stop caring. For the audience, being thus denied leads to frustration, and frustration leads to the dark side, that is, writing Wish-Fulfillment fan fiction as a form of emotional venting.

There's a whole nomenclature dedicated to Quick, Easy and Idiosyncratic Ship Naming, often varying from fandom to fandom. The most basic tool of communication here is the slash — if you wanted Alice and Bob to get together you could always say you shipped Alice/Bobnote An x is also often used, so Alice x Bob. However, for most fandoms that's just not exotic enough. They will not be content with anything less than a short, sweet and catchy brand name — the more Incredibly Lame the Pun, the better (Harry Potter fandom actually named ships the "HMS this-and-that"). Shipping culture has also imported the Portmanteau Couple Name from Japanese Anime fandom; apart from its infamous usage in the gossip industry ("Brangelina", "Bennifer", "TomKat"), you can find people online declaring themselves fans of "Pepperony", "Wuffara", "NaruHina", "Sheelos", "Applepie", and "Jam". Yes, Jam. Needless to say, if some series has Theme Naming shippers will exploit it Just for Pun — In Real Life, 3/4 is just a rational number greater than one half and less than one. Not so in the Codename: Kids Next Door, Mobile Suit Gundam Wing, or Splatoon fandoms.

As far as omnipresent forces of nature go, shipping is up there with Death and Taxes; an "Example Section" would just be a list of works popular enough to have a member of their fandom happen to come across this page. Suffice to say that on any show, "Alice/Bob is popular and so is Eve/Mallory, though there is lots of vitriol between supporters of Gum/Popsicle and Twix/Popsicle", up to minor variations. For an example with some unique flavor to it, you might want to look into Shipping Tropes.