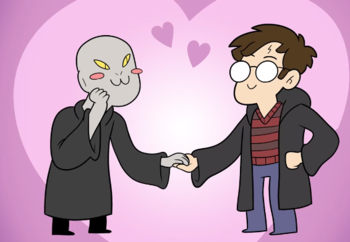 "Is that what you want, Peepers? For me to marry the person I hate the most in the entire universe?"
— Lord Hater, Wander over Yonder
Advertisement:

So there's these two characters, right? And they spend 95% of their time thinking about each other, what the other one's planning or doing, and whenever they converse their dialogue is incredibly emotionally charged. Fortunately, there's a nice family-friendly explanation: they're arch-enemies, right? Right...

This audience reaction trope happens when fans interpret subtextual marks of sexual tension in a tense, antagonistic, or outright violent relationship, and subsequently write Fan Fic and make Fan Art where the arch-enemies love each other. They might write plots that end in a Dating Catwoman resolution, or use The Power of Love to induce a Heel–Face Turn (or more rarely, induce a Face–Heel Turn), or exploit the existing dynamics to show a romantic relationship that's dysfunctional or outright abusive. If the antagonist's one-sided crush is already canonically admitted, in these Fan Fics the protagonist might believe that Stalking Is Love, and reciprocate the feelings.

Psychologically speaking, this is generally the result of a principle known as misattribution of arousal. For more explanation, see analysis.

Compare to Belligerent Sexual Tension and Foe Romance Subtext, where there's actual romantic tension between the characters. There's potential overlap with No Yay for examples that go the extra mile in squickiness.