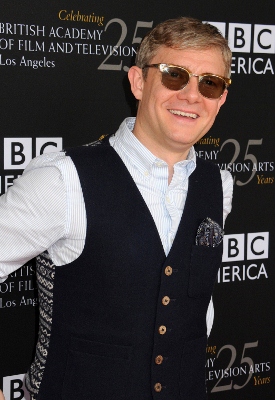 "There is no denying, however, that I'm in "The fucking Hobbit", playing the fucking hobbit."
—Martin Freeman, on his casting in

The Hobbit (relevant moment at 31:25)
Advertisement:

Best known for playing Deadpan Snarker, Charismatic Everyman, and/or Badass Adorable characters, such as Tim in The Office, John Watson in Sherlock and Bilbo Baggins in The Hobbit. He is made of jam, kittens, cuddly jumpers, and RAGE. Also, he is a hedgehog. He is also a terrible dresser (although opinion is divided about that, he does pick some outrageous outfits from time to time).

As well as a killer deadpan delivery style, he has truly epic facial expressions of exasperation and despondency, such that he can take on other so-called leaders in the field and blow them out of the water!

When it was announced that he was to play Bilbo Baggins in Peter Jackson's movie version of The Hobbit, much of the fandom rejoiced. So did Jackson, who was so desperate for Freeman to play the eponymous Hobbit that he reworked his entire shooting schedule to allow Freeman time to film the second series of Sherlock, which was scheduled to film in the middle of shooting for the trilogy and which would have otherwise prevented Freeman from taking the role.

He resides just outside London and separated from his partner, fellow actor Amanda Abbington (Mr Selfridge, Mary Watson on Sherlock). They have two children.

His biggest strength as an actor is considered a thing all of his own we don't even have a trope for, that might be described as "microexpression".