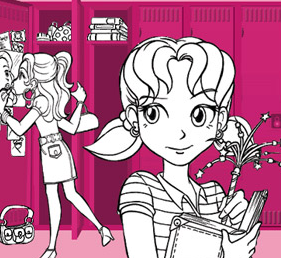 Dork Diaries is a series of books directed at tween girls by Rachel Renee Russell. They follow the misadventures of Nikki J. Maxwell, a slightly bratty and shallow but still well-meaning and likable fourteen year old girl. The story begins when Nikki's family moves because of her father's job, and Nikki is transferred to Westchester Country Day, a private school that is much too fancy for Nikki's tastes. There, she meets Alpha Bitch MacKenzie Hollister, Chloe Garcia and Zoey Franklin (unpopular but awesome new friends), and Brandon Roberts (Nikki's crush, MacKenzie's crush, and overall Nice Guy).

There are 15 books so far, as well as two companions.

In 2016, a Spin-Off series, The Misadventures of Max Crumbly, was launched, focusing on a character which debuted in Tales from a Not-so-Perfect Pet Sitter.

In 2015, it was announced that a live-action film adaptation of the books was in the works at Summit Entertainment. However, with minimal updates since, the movie appears to either be in Development Hell and may have been cancelled.

Tropes found in The Misadventures of Max Crumbly