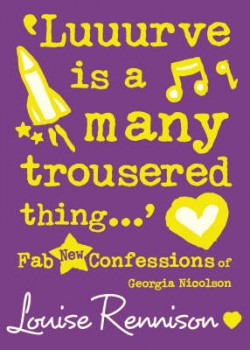 "You are, in the nicest possible way, quite possibly clinically insane."
Advertisement:

Wildly popular teenage literary series by Louise Rennison. The books are the diaries of Georgia Nicolson, who is 13 at the beginning of the series and 15-16 in the last installments. So popular in the author's native Britain that the books were released in the USA with minor adjustments and were adapted into a film that was released in 2008.

Noted for containing many "Georgia-isms" that have made their way into everyday language, such as "nunga-nungas" (breasts), "marvy" or "fabby" (anything Georgia likes) and "I'm away laughing on a fast camel" (goodbye). Reprints of the books include a glossary.

The series comprises of: