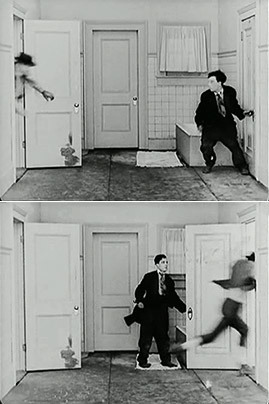 In zany comedies, when a villain attempts to break down a door by charging at it, sometimes the best tactic is to simply open it.

The trick is to do it at the exact moment when they would have rammed it. When it works, the villains cannot attempt to stop or even slow down, but just keep going at full speed. Then they usually run into any number of traps prepared to bring them down — or out another door on the far side of the room.

This move becomes even harder to dodge when the door is made of two fully independent parts.

Compare Door Fu, which is when a character tears off a door (or picks up a torn-off door) and uses it as a weapon. Contrast Tae Kwon Door; for when you want to use the door to cause damage to your enemies instead of letting them through.