I Can't Believe a Guy Like You Would Notice Me 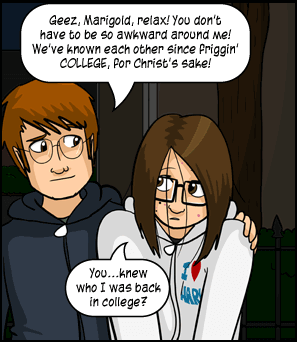 Vette: You're a super powerful Sith Lord who could have anything he wants. I'm a former slave and a thief. And you chose me? Seriously?
Male Sith Warrior: You're beautiful, charming, sometimes crazy, and always exciting. What man wouldn't choose you?
— Star Wars: The Old Republic
Advertisement:

Also known by: "I didn't know you knew I was alive!"

This stock phrase is most frequently used in teenage romance stories, but not unheard of in other media.

Essentially it's a declaration of delighted astonishment that one's object of romantic desire seems to feel the same way when the person saying it believed they never had a chance with their target partner. Often this occurs when the jock discovers Nerds Are Sexy.

Alice has had romantic feelings for Chuck from afar for some time, but never knew that Chuck was interested, so she's happily surprised when it turns out he is. Cue "I can't believe a guy like you would notice me!" In some cases, Chuck turns out to be a Jerkass who is taking advantage of a girl who likes him because it strokes his ego. He may twist the knife by laughingly saying, "You honestly thought I liked you?" Although, in certain cases, Chuck is being noble by breaking up with her for what he believes is her own good or protection.

Occasionally, there's a socio-economic element: The girl from the wrong side of the tracks thinks the rich boy wouldn't be interested in her. Or, the boy from the poor side of town heeds his friends' warnings that the girl he likes is a Rich Bitch, but she turns out to be a nice girl who genuinely likes him.

The Stock Phrase is most frequently spoken by a gal, but there have been occasions where a guy has said it as well.

When used in live-action media, it often overlaps with Hollywood Homely. If a guy says it about a gal, said gal will often be the latter half of Betty and Veronica. May also overlap with Attractiveness Isolation and Insecure Love Interest. If the bystanders didn't think he would notice, see What Does She See in Him?. Can easily lead to a Nobody Thinks It Will Work situation.

Compare and contrast: The Schlub Pub Seduction Deduction, when a guy is so unattractive that the beautiful woman who's coming on to him must be interested in him for ulterior motives rather than for his sex appeal.

Alternative Title(s): I Cant Believe A Girl Like You Would Notice Me