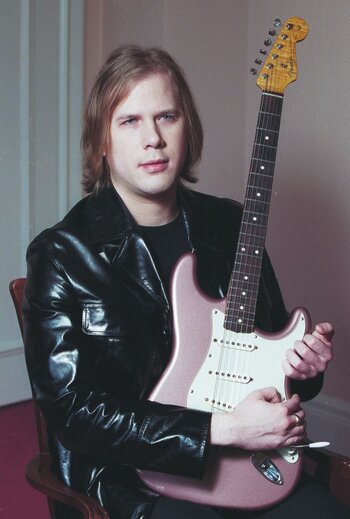 Norman Jeffrey "Jeff" Healey (March 25, 1966 – March 2, 2008) was a Canadian musician. At the age of eight months, he was stricken with retinoblastoma, a rare ocular cancer. He underwent surgery to remove both eyes, which rendered him blind for life. Jeff took up guitar at age 3, developing a unique playing technique in which he lay the instrument flat across his lap, with his left hand palm-down over the fretboard, resulting in a characteristic richness and fluidity that would become his signature style. As a teenager, he began establishing a name for himself by playing coffeehouses and bars around Toronto.
Advertisement:

In 1988, after a chance discovery by Stevie Ray Vaughan, the Jeff Healey Band signed with Arista Records and launched their debut album, spawning the John Hiatt-written single "Angel Eyes," which peaked at number 5 on the Billboard Hot 100. Healey also appeared in the So Bad, It's Good Patrick Swayze movie Road House, as a blind white guy who plays a mean blues guitar. The band went on to release several more blues albums. They toured extensively and developed a loyal following.

Later on, Jeff got married and started a family, as well as releasing a few jazz albums with his side project, the Jazz Wizards. Sadly, he succumbed to a recurrence of the cancer in 2008.