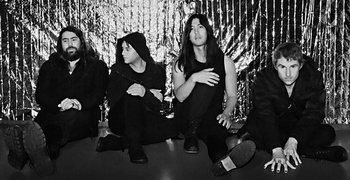 "We fall apart. It's not our fault. Life is strange, but it's all we got."note from left to right: BJ Miller, Jake Duszik, John Famiglietti and Jupiter Keyes
"Let the guns go off
Let the bombs explode
Let the light go dark
Life is good"
— HEALTH, "NEW COKE"
Advertisement:

Somewhere in the hollow depths between Industrial Metal, EBM and pure Noise Rock, there's a band who takes it upon themselves to leave listeners as equally unsure of what they're hearing as they are intrigued.

Formed in the mid 2000s in the seedy club scene of Los Angeles, HEALTH (all caps) are a trio (formerly a quartet) who specialize in making loud music that's difficult to describe in terms of genre. Their work exhibits traits of the noise, electronic, punk, synthpop and industrial scenes, but labeling them as just one of the above would be too reductive. It's visceral, loud and room-shaking stuff that's earned them a spot in the pantheon of beloved indie acts.

Their self-titled debut released on a small L.A. based label, Lovepump United, in 2007, with a critically-acclaimed remix album, HEALTH::DISCO releasing the next year. Around the same time, a remix of their song "Crimewave" by indie duo Crystal Castles boosted both bands' profiles.

The band returned with their second album, GET COLOR, in 2009, and followed the template set by their first album cycle with a sequel to the remix album, DISCO2, in 2010. HEALTH's work would eventually catch the eye of Rockstar Games, who would enlist them to create the score for their long-awaited game Max Payne 3, which dropped in 2012. (HEALTH would also make an appearance on the Grand Theft Auto V soundtrack with a cover of "High Pressure Days" by the Units.)

HEALTH resurfaced in 2015 with DEATH MAGIC, a slickly produced, sonically diverse followup to GET COLOR released on a new label (Loma Vista Recordings, also home to acts like St. Vincent, Ghost and Marilyn Manson). True to their tradition, DISCO3 and DISCO3+ arrived in 2017 with more remixes and bonus tracks. Founding member Jupiter Keyes left the band during this album cycle, though he's since popped up with production work for Alice Glass (previously the lead vocalist in Crystal Castles).

The band's fourth album, VOL. 4: SLAVES OF FEAR, dropped in February 2019, alongside a set of collaborative extra singles (made with fellow rabble-rousers JPEGMAFIA, Soccer Mommy, Youth Code and Ghostemane, among others) and the soundtrack to GTA Online’s Arena War content update (continuing their long-standing creative partnership with Rockstar). All collaborations were later on re-released with a batch of new ones (featuring artists like The Soft Moon, 100 gecs and Full of Hell) as DISCO4 :: PART I in late 2020. The follow up DISCO4 :: PART II was released a year and a half later - this time around featuring collaborations with artists like Poppy, Nine Inch Nails, Lamb of God, The Body, Perturbator, Backxwash and The Neighbourhood.

Also, you probably couldn't tell just by listening to the music, but any time spent on their social media accounts (including their Discord server) will reveal that they're huge turbo-nerds with a fondness for memes, video games, and anime. It helps makes more sense of their tendency to contribute to video game soundtracks.