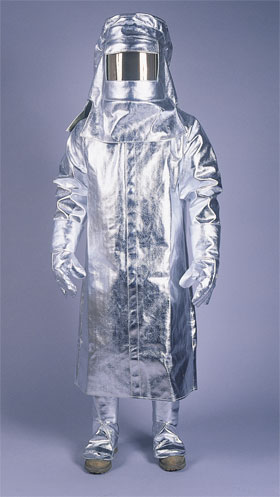 For best results bake at 205 degrees Celsius for one hour after adding ventilation holes and coating in olive oil.
"I kind of like it in here, it's private."
— Jamie Hyneman, on the unexpected perks of safety equipment
Advertisement:

If you want a good idea if something dangerous is up, probably involving Applied Phlebotinum or Fast-Killing Radiation, look for workers wearing Hazmat Suits.

For dramatic reasons, this may correspond with Malevolent Masked Men or Faceless Goons in visual media. On the other hand, with sympathetic characters, it often turns out that In hazardous environments, everyone can see your face.

If the suits suffer Clothing Damage during dangerous conditions, you can be certain bad things will happen afterwards. Armor Is Useless can apply sometimes, making it all the worse.

In Real Life, not really so sexy as it seems. A Level A Hazmat suit is heavy, clumsy, hot, and uncomfortable. The same properties that see to it that nothing outside can get in also see to it that nothing inside can get out, which includes the wearer's sweat and body odor. You're just out of luck if you are in one when you suffer a Potty Emergency (yes, the CDC do ask if you can hold your pee when you apply to work in a Biosafety Level 4 lab). Plus there's the fact that you're wearing it because something nearby is likely to kill you. In addition, it can get unpleasant if you get an itch or something like that while in the suit and inside hazardous ground, as you can't simply open the suit to get at the itch right there and then.

Then there's the thing to the right, which is a heat resistant suit worn when working around things that are excessively hot, such as oil rig fires, iron smelters, active volcanoes, and replicas of invading triremes. You're wearing it because otherwise you'd be turned into a crispy critter in minutes. Even with it, though, you feel like you're in a sauna while wrapped in an unusually stiff duvet, oven mitts, and a hockey helmet.note Except when it is equipped with a cooling system, in which case you fell like you're wrapped in a cold stiff duvet, oven mitts and a hockey helmet. And have to lug a thick hose/cable or a heavy backpack around.