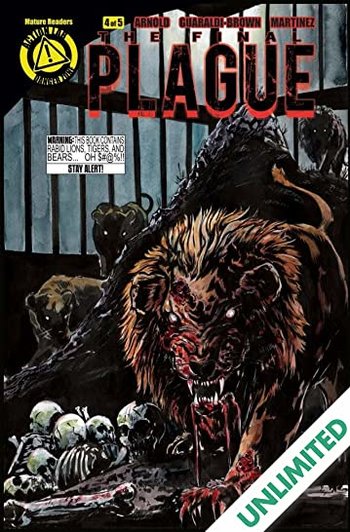 The Final Plague is a Zombie Horror Comic Book by J. D. Arnold and Tony Guaraldi-Brown.

It all started as a typical day for the Michaelses, a rural farm family. The most significant thing that happened being a rat that seemed rather hard to kill. Meanwhile, a team of scientists are researching a new virus that seems to have cropped up in animal populations. It seems to not only make animals vicious, but it also seems to make them able to move even after sustaining fatal damage.

Yes, this is the Animal Zombie Apocalypse.

Now the farm family and the scientists are all that are keeping humanity from total extinction.

The Final Plague contains examples of: