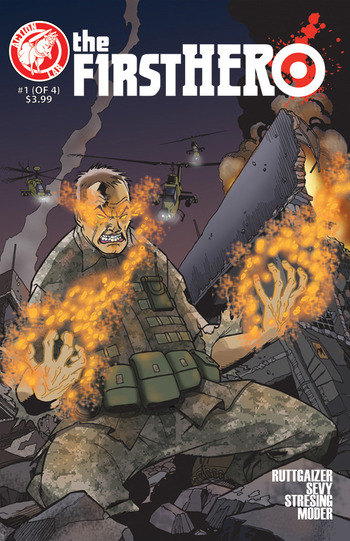 The F1rst Hero is a Comic Book by Anthony Ruttgaizer, Phillip Sevy, and Fred Stresing.

For as long as anyone has known, there has been one truth about superpowers: whoever gains them goes insane and quickly becomes a threat to the world. These people are labelled as "extrahumans", and are seen as a menace by the public.

As a result, Jake Roth soon finds himself in a rather unique position: he manifested superpowers, but actually managed to retain his sanity. Now he needs to decide whether to use his powers for the good of humanity (while also running the risk of exposing himself to public scorn), or hide them from the public and let evil continue to happen.

The F1rst Hero contains examples of: