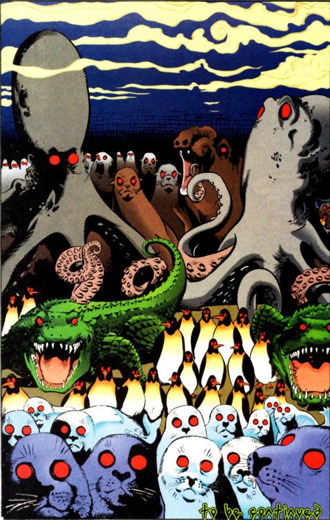 Sometimes the Zombie Apocalypse, not unlike the bird flu, can carry to other species than just humans.

Yes, occasionally even dead animals can be revived into shambling monstrosities after human flesh. This can reach such levels of ridiculousness as (as suggested by the title) meat animating itself and moving around.

In video games, these animals are often also an example of Night of the Living Mooks, but not always.

In works where zombie humans have Zombie Gait, for some reason animals almost never move slower. If anything, they might even get a speed or strength bonus. Can in some cases be justified when zombification reduces brain function, as it takes more dexterity for a biped to run without falling over. Can also be justified in that the zombie plague causes the higher brain functions to cease, while the animal part of the brain keeps functioning. If the subject's already an animal, then there's no hindrance. Likewise, the fact that zombies don't get tired may work in a reanimated animal's favor, as many living carnivores are sprinters, unable to sustain high speeds for long.

A specific form of animal zombies are living taxidermied animals. They're a mummy variant.

See also Non-Human Undead for non-humanoid undead other than normal animals, such as Dracolich for zombie dragons. Sister trope to Ghostly Animals. Super trope to Undead Fossils, where the animals in question are prehistoric. For actually raising animals to turn into steaks, see Let's Meet the Meat.

Turns out that the US government is experimenting on animals and creating Radioactive Zombie Cows.

Turns out that the US government is experimenting on animals and creating Radioactive Zombie Cows.