"You can't just bury stuff, Buffy. It'll come right back up to get you."
-Xander Harris 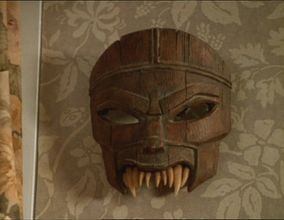 Joyce is hanging up a Nigerian mask given to her by a friend at the gallery while Buffy finishes unpacking. She reluctantly allows Buffy to go to find her friends, who are coordinating a vampire hunt via walkie-talkies. Buffy stumbles upon the vamp-hunting Schoobies and assists them in staking, only to have everyone shocked at her sudden return. Everyone heads to Giles' apartment, where he puts on the usual 'stiff upper lip' when he sees that Buffy has returned. Later, everyone discusses the news that Buffy is no longer wanted for Kendra's murder and also speculate on where Buffy went during the summer while, unseen by the others, in the kitchen Giles nearly cries from the relief that Buffy has returned safely, but composes himself before returning to the group.

The next day, Joyce takes Buffy to see Principal Snyder, who takes vindictive pleasure in keeping Buffy from re-entering Sunnydale High despite the fact she no longer has criminal charges against her. Joyce then discusses the idea of sending Buffy away to school (with the obvious intent of getting her out out of harm's way in Sunnydale) before dropping her off at a coffee shop for a scheduled meeting with Willow, who does not show up. Buffy goes home and meets Pat, a book club member of Joyce's who does not hesitate to comment about Buffy's recent behavior and its impact on Joyce. While fetching fancy "company" plates for a dinner with her friends that Joyce arranges, Buffy finds a dead cat in the basement. Buffy and Joyce bury it, but later that night, the Nigerian mask's eyes glow red, and the dead cat crawls its way out of its grave.

Buffy has another nightmare involving Angel. The next morning, while she and Joyce are discussing her schooling options in the kitchen, Joyce suggests that Buffy should not be so secretive and tell a few people such as Principal Snyder and the police that she is the Slayer. The dead cat surprises them. Giles comes over to remove it in a cage. Buffy waves him in and says, "Welcome to the Hellmouth Petting Zoo." He notices the mask before leaving for the library, and Buffy gets ready to head there with him, but Giles stops her, as she is no longer allowed on school grounds. Later in the library, the gang are discussing various "welcome back" dinner scenarios for Buffy ("Is it a gathering, or a shindig, or a hootenanny?"), but convince themselves that a big party would be more appropriate. Giles, who is doing research on Buffy's reanimated cat, is distracted by the discussion and overlooks a page in his book showing Joyce's Nigerian mask.

Dingoes Ate My Baby soon arrives at Buffy's house without notice, along with many "guests" from school that Buffy barely knows. Overwhelmed by all of the partygoers, Buffy tries to talk to Willow, who pretends to be distracted so that she doesn't have to talk to her. Buffy then tries to talk with Xander and Cordelia Chase, but finds that they're too busy kissing each other to be bothered. Meanwhile, Joyce is telling Pat in the kitchen how much it means to her to have Buffy back, though it has been harder on her than expected. Overhearing only the end of Joyce's statements and misinterpreting them, Buffy goes upstairs and decides to pack her things again.

At the library, Giles is horrified by what he finally uncovers about the mask. He tries to phone Buffy's house, but the partygoers who answer the phone fail to properly relay his message, or even understand it, with Dingos Ate My Baby playing at full volume ("There's no 'Buddy' here! You've got the wrong house, 'Mr. Belvedere!'").

Willow, having decided to try and make things up with her friend, finds Buffy in the bedroom and is visibly angry that her best friend is thinking about leaving again. The two then get into an argument, as Willow accuses Buffy of just giving up on Sunnydale and for not being there for her during a summer when she needed her help as Willow's life developed (due to dating Oz and dabbling in magic). Willow also accuses Buffy of being so worried about people being angry with her that she didn't bother to ask anyone else how they were doing.

Giles decides to drive to the party, angrily talking to himself about how dumb Joyce was to hang a cursed mask as decoration ("Do you like my mask? Isn't it pretty? It raises the dead. ...Americans!"). On the way, Giles accidentally hits a man standing in the road. He gets out of his car and discovers that the man is a reanimated corpse. Giles barely escapes oncoming zombies as other dead bodies rise all over Sunnydale.

Joyce walks in on Buffy packing to run away again, finds out what's happening and, regardless of the fact that people are watching, decides to have it out with Buffy, furious that her daughter is willing to put her through the misery of not knowing where she is again. As party guests quickly leave the awkward situation, Xander also decides to vent at Buffy about how selfish her running away was, while Cordelia takes Buffy's side and Oz tries to keep everyone calm. Just as Buffy is about to completely break down, the newly reanimated zombies crash through the windows and doors, causing the Scoobies to immediately drop their argument and band together to combat the threat. Several guests are killed. Oz and Cordelia hide in a downstairs closet, while Buffy and others rush upstairs with a gravely-injured Pat. In the bedroom, Willow checks Pat's pulse, only to find that she is dead.

Giles arrives to tell Oz and Cordelia about the mask containing the powers of the zombie demon Ovu Mobani, which means "Evil Eye." Whichever zombie puts it on becomes the demon incarnate, which Pat does. Other zombies cower down while Buffy soon realizes that the demon's gaze hypnotizes whoever is looking at it when its eyes flash (like a camera flash). Buffy pushes the newly demonized Pat out of the window shortly before it could kill Willow. Oz tries to tell Buffy about how to kill it, when he is hypnotized. Buffy uses this opening to plunge a shovel into the Pat demon's eyes, depowering and killing it. It vanishes along with all the other zombies.

With the demon's defeat, Joyce and the Scoobies are unable to bring themselves to spite Buffy any longer, and the entire group embraces.

The next day, Giles tries to convince Snyder to let Buffy return. When Snyder refuses, Giles warns him that he will take things up with the state supreme court and make life very difficult for him, professionally. When Snyder still resists, Giles physically intimidates him into giving in. Meanwhile in the coffee shop, Willow tells Buffy about her dabbling in magic and the two, once again best friends, bond by trading playful insults.