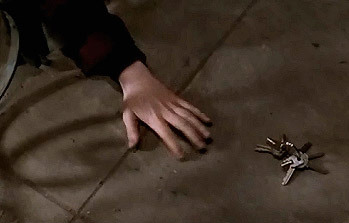 And they landed just out of her reach, too!
"Sin #31: Panicked character struggles to use keys cliché."
— CinemaSins analyzing 10 Cloverfield Lane
Advertisement:

Whenever a character is in immediate danger, they will rarely just be able to run away from said threat. Usually, a locked door or gate will get in their way. But not to worry, the character always has the right keys and just enough time to open the door before they are killed.

Except... Uh-oh! They just dropped the keys!

The Dangerous Key Fumble trope refers to the often-used cliche (particularly in horror movies) where a character will always drop their keys if they are in a life-or-death situation. It doesn't matter if a killer is right behind them, or if a pack of wild and hungry animals is mere seconds from tearing them apart, the character will always fumble with and drop their keys at a crucial moment, thus giving the threat some much-needed time to catch up with them (and in some cases, actually kill them).

This also happens often in car scenes too... If a character wants to escape from something in their car, they can never just put the key in the ignition and start the engine. First, they will drop the keys near the gas pedal and spend the next minute-or-so stumbling around to find them. (And then, of course, when they do get the keys in, the car won't start...but that's another trope.)

See also Pet Gets the Keys.