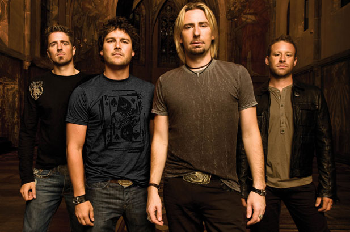 "Yeah, sure. (laughs) We suck. Our music is terrible. Everyone hates us. Chad Kroeger is the worst singer ever. I've heard it before. We've all heard it before. But you know what? These *points to the row of eight platinum records on his wall* tell me that someone out there is buying our music. What did what's his name say? I'm crying all the way to the bank?"
—Chad Kroeger (actually quoting Liberace, who was similarly bashed by critics)

Nickelback is a Canadian Hard Rock/Post-Grunge band formed by Chad Kroeger, his half-brother Mike Kroeger, guitarist Ryan Peake, and then drummer Brandon Kroeger. They're known for producing many hit songs that tend to sound suspiciously similar to each other, and Chad Kroeger's, um, distinctive voice.

Their current lineup is: