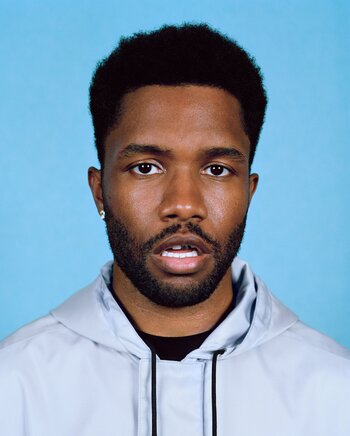 Frank Ocean (born Christopher Edwin Cookseynote later Christopher Edwin Breaux on October 28, 1987 in New Orleans, Louisiana) is an American singer-songwriter, rapper and producer. Known for his elliptical songwriting, expansive genre influences and wide vocal range, Ocean's music is typically categorized as R&B but covers a wide variety of styles and influences, and he is considered one of the leading artists in the alternative slant of the genre that struck out in the 2010s.

First taking an interest in music from a young age, he planned to study English at college in his hometown of New Orleans. However, his home and recording facility were destroyed in Hurricane Katrina, which led to him briefly transferring and ultimately dropping out of college to pursue music in Los Angeles. In less than three years, he established himself as a songwriter under the name Lonny Breaux, writing songs for artists including Justin Bieber, Beyoncé, John Legend and Brandy. He eventually decided that this work, while comfortable, wasn't what he wanted to do forever.

Adopting the name Frank Ocean (believed, but never confirmed, to have been inspired by the original Ocean's Eleven film, in which Frank Sinatra, a muse of his, plays Danny Ocean), he joined the Odd Future music collective after meeting them in 2009. The same year, he signed a writing contract with Def Jam but ended up feeling neglected by the label, to which he began work on an independent mixtape. The end result, nostalgia, ULTRA., was self-released in 2011 to critical acclaim, earning him fans and future collaborators in high places (namely Kanye West, and through him Beyoncé and Jay-Z). However, the mixtape was not without similarly high-profile opposition, namely from the Eagles, whose legal action towards the track "American Wedding" (a remake of their song "Hotel California" that they took far less than kindly to) has kept the entire mixtape inaccessible from streaming for over a decade.

Ocean's debut album channel ORANGE was released in summer 2012 to some of the strongest critical acclaim of any album that year, as well as a Grammy Award for Best Urban Contemporary Album and a nomination for Album of the Year. The album's thematic focus on unrequited love drew significant attention due to its recurring use of male subjects and pronouns, which became an area of special interest after Ocean shared an open letter prior to the album's release in which he stated that his first love was a man. The release of the letter has since been considered a watershed moment in dictating the shifting sentiments and increased acceptance of the hip-hop world towards the LGBT community over the coming decade. While Ocean has never to this day specified a label for his sexuality, he has since become known as one of the highest-profile openly LGBT male stars in R&B music and an icon for the community.

While Ocean confirmed in 2013 that work had begun on his follow-up album, it would take until the end of summer 2016 for said album — Blonde, originally titled Boys Don't Cry — to release after one of the most infamous and widely publicized album delays of its time. (Seriously; even Adele complained.) However, several weeks prior, a cryptic livestream began on Apple Music that showed Ocean building a staircase in a warehouse with new instrumentals playing in the background. This would eventually become the visual component of another new album, Endless, which Ocean released to fulfill his Def Jam contract as the final step in a "seven-year chess game" Ocean enacted to part ways with the label, which has been said to have finessed the label out of tens of millions of dollars. Blonde was subsequently a fully independent release.

Ocean's music career has, as of this writing, continued from there mainly through singles and features, although he has taken on separate ventures including an Apple Music 1 radio show titled blonded RADIO, which was additionally included as a radio station in a late 2017 update of Grand Theft Auto V, and a luxury jewelry company called Homer. He was set to headline Coachella in 2020, but following its cancellation as a result of the COVID-19 pandemic, it was announced in August 2021 that he would instead headline the festival in 2023.

Ocean's music has consistently earned critical acclaim and accolades as well as commercial success, making him one of the most successful R&B artists and most celebrated songwriters of his generation.