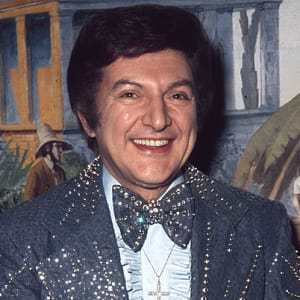 "Liberace was one of the biggest stars in America. He was a kind of a phenomenon."
— Michael Douglas, who played him in Behind the Candelabra
Advertisement:

Władziu Valentino Liberace (May 16, 1919 – February 4, 1987), known by those close to him as "Lee" or "Walter", was an American pianist, singer and actor. Born to Polish and Italian immigrants, he was a Child Prodigy, learning to play the piano at age 4, and able to remember even difficult pieces by the time he was 7. He soon went on to play with well-known orchestras, and toured throughout the United States.

In the 1940s, he moved away from classical music, adding some traditional "pop" styling to his piano music. This soon found success, and for the next four decades, he would become a fixture in the entertainment world. As well as his own The Eponymous Show in the 1950s and frequent guest appearances As Himself on variety shows, he had a memorable Guest Star turn in Batman (1966) in a dual role as concert pianist Chandell and his gangster twin Harry. His two-part episode drew the highest ratings of the series. He would also go on to get a residency show in Vegas, star in motion pictures (his turn as a coffin salesman in The Loved One being a particular high point), and become the highest-paid entertainer in the world.

He was also well-known for his oft-mocked flamboyant style, dressing in nice suits and elaborate costumes, and buying many expensive items, earning the nickname "Mr. Showmanship".

Throughout his life, there was much speculation about his sexuality. This began with tabloid publications in the mid-1950s. Liberace vehemently denied that he was gay, and sued the British Daily Mirror and the American Confidential. The famous phrase "I laughed all the way to the bank" originates from a response he had to a poor review of his work- in later reviews he said he cried all the way to the bank, including when suing the Daily Mirror, but the original stuck. He won the Mirror suit in 1959, and the Confidential suit was settled out of court. Nonetheless, parodies of Liberace played up his flamboyance (if such a thing were possible) and generally treated him as "obviously" gay without saying so out loud.

In 1985, he was found to be HIV positive, a fact he concealed from the public. He died 18 months later on February 4, 1987. He was officially outed by Betty White, a longtime friend, in an interview in 2011, when she admitted that she often bearded for him at public events. Even The Other Wiki now acknowledges that he was gay.

Liberace assures Sam the Eagle that he won't wear a rhinestone tuxedo and play shameless boogie-woogie soon only to say he'll do them right now.

Liberace assures Sam the Eagle that he won't wear a rhinestone tuxedo and play shameless boogie-woogie soon only to say he'll do them right now.