Elvis Has Left the Planet 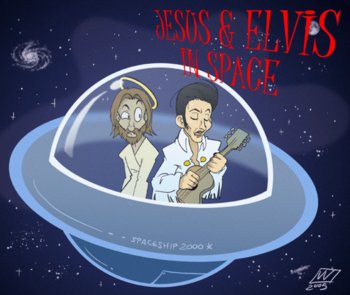 Jesus and Elvis IN SPACE by vern-argh

Agent J: You do know Elvis is dead, right?
Agent K: No, Elvis is not dead, he just went home.
— Men in Black
Advertisement:

Elvis Presley's death shocked millions of people. Many of these were so shocked that, rather than simply believe he had died, they decided that something was up — that he was faking, like Roy Orbison, or that he had been abducted by aliens, or that he was an alien himself, or any of a million different explanations. Today, we (or at least most of us) understand that Elvis is dead, but the media continues to utilize, poke fun at and abuse the general idea.

If he's still on Earth rather than in space, it's a case of Elvis Lives.

A Discredited Trope by this point, since even if Elvis had survived, he'd likely have died of old age by now anyway. Then again, presumably the aliens could fix that one.

Not to be confused with the phrase "Elvis has left the building," which is a form of That's All, Folks!