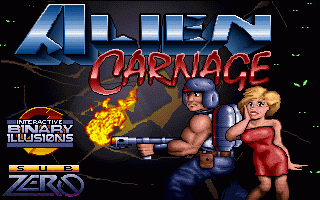 Alien Carnage, originally called Halloween Harry, is a side-scrolling platform game written by SubZero Software and distributed by Apogee Software. The game features 256 colour VGA graphics and background music in MOD format. Alien Carnage is composed of four episodes. The first episode was released as shareware, and the rest were distributed commercially.
Advertisement:

In May 2007, John Passfield and 3D Realms released Alien Carnage as freeware.

The cartoon-style game features agent Halloween Harry, who has to save the world from aliens that want to take over control of Earth by turning its population into green-skinned zombies. Some of the enemies reference Aliens, Gremlins, and Elvis Presley. Harry is helped by controller Diane, who gives him information via a video link.

There is a sequel to this game titled Zombie Wars.