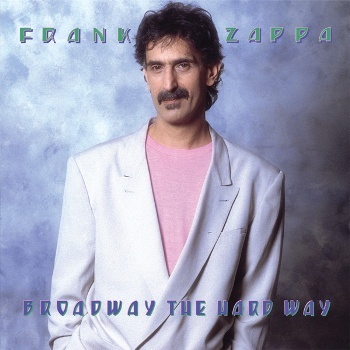 Broadway the Hard Way is a 1988 Live Album by Frank Zappa, taken from his world tour that same year (which also ended up being his last; his diagnosis with terminal pancreatic cancer in 1990 caused him to dial back his live appearances to a considerable extent before his death in 1993). It is notable for being one of his most political, with the majority of tracks tackling the Reagan administration, televangelists, and the Iran-Contra scandal, but also people like Richard Nixon, Jesse Jackson, Elvis Presley, and Michael Jackson. Compared to the LP release, the CD features eight additional tracksnote "Why Don't You Like Me?", "Bacon Fat", "Stolen Moments", "Murder by Numbers", "Jezebel Boy", "Outside Now", "Hot Plate Heaven at the Green Hotel", and "What Kind of Girl?" and a considerably different running order; given these two factors in combination, both tracklists will be listed here for convenience.

"Elvis Has Just Left the Building", "Jesus Thinks You're a Jerk", "Dickie's Such an Asshole" and "Hot Plate Heaven at the Green Hotel" have become fan favorites, and Zappa's performance of The Police's "Murder By Numbers" with former Police frontman Sting on lead vocals is generally considered a highlight of both performers' careers.

Broadway the Hard Way is one of three live albums taken from Zappa's 1988 world tour. The other two, The Best Band You Never Heard in Your Life and Make a Jazz Noise Here, were later released in 1991.