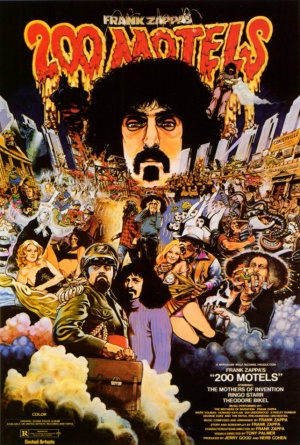 are credited as co-directors; Zappa directed the performances, Palmer did the visuals). It was released with an eponymous soundtrack. Both the film as well as the album are a surreal Satire of a rock band on tour. The film stars Zappa's own band members- the Mothers of Invention- as caricatures of themselves. The film also has supporting roles for Ringo Starr as Larry the Dwarf (aka Frank Zappa), Keith Moon as a nun groupie, Theodore Bikel as Rance Muhammitz and the notorious groupie Pamela des Barres as a reporter. Various problems caused the project to change direction during recordings. The budget was cut and one of the band members, Jeff Simmons, left the group halfway. As a result only one third of Zappa's script could be filmed. While the man tried to make something coherent out of it in the editing room the film still ends up as a confusing mess.

While one can only wonder What Could Have Been if it was actually finished, it's still a visually interesting and often funny film to watch. Compared to Zappa's other film project Uncle Meat (1988)- even more low-budget- 200 Motels is much more enjoyable. Still the Cult Classic can be disappointing for fans who actually want to see Zappa himself, because he's hardly seen in this film and doesn't even have a line. In that respect the two hours and a half Concert Film Baby Snakes (1979) gives you more your money's worth.

Before the arrival of Internet 200 Motels was very difficult to find and could only be ordered on video through Zappa's own company. Therefore it is safe to say that the Cult Soundtrack album has probably reached more people than this Broken Base film project. Just like Chunga's Revenge (1970), Fillmore East, June 1971 (1971) and Just Another Band from L.A. (1972) the album features Mark and Howie from The Turtles as lead vocalists and deals with Satire about rock artists on tour and groupies.

Zappa's original score ran to several hundred pages, and after his death his widow Gail decided to make arrangements to finally give it a formal debut on a classical concert stage. There were a couple European shows in 2000, then in 2013 a version called 200 Motels: The Suites, which drew on both the film and the score, got full performances in Los Angeles and London. The LA Philharmonic version was released as an album in 2015 and received a Grammy nomination.

Fan favorites are "Lonesome Cowboy Burt", "She Painted Up Her Face", "Dental Hygiene Dilemma", "Does This Kind Of Life Look Interesting To You?", "Penis Dimension", "Magic Fingers" and "Strictly Genteel".

Tracklist of the soundtrack

Bonus tracks on the CD